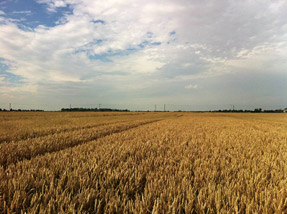 The Southern Survey was created in 2015 and comprises lands previously managed alongside the Cheshire estate, as well as land recently acquired in Lincolnshire. It includes lands in Northamptonshire, South Wales, the Peak District and Lincolnshire and extends to a total of 3,659 hectares.

The 810-hectare Northamptonshire estate is centred on Higham Ferrers and Wollaston and consists mainly of arable farms. It also includes an 18-hole golf course and a Vocational Skills Academy developed jointly by the Duchy and Moulton College.

In South Wales, the Ogmore estate consists of 1,645 hectares of common land and includes an active limestone quarry, a Castle and a golf course.

At Castleton in the Peak District, the Duchy owns 124 hectares of grazing land, as well as Peveril Castle, the Peak Cavern tourist attraction and historic mineral rights under a wide area.

The Lincolnshire estate currently consists of around 1,053 hectares of prime agricultural farmland, based largely around the town of Donington to the west of Spalding. All five Duchy farms are operated by significant potato and salad/root crop producers. This is part of a Duchy policy to diversify its agricultural holdings by investing in high quality cereal and root crop farms in the Lincolnshire area. Additional land has also been acquired at Bicker. The Lincolnshire Survey also includes the historic Bolingbroke Castle and a large area of tidal mudflats.