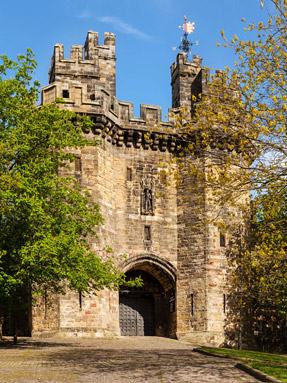 Lancaster Castle is one of the best preserved castles in the country.

Lancaster Castle is one of the best preserved castles in the country. An impressive stone fortress, it played a central role in the County Palatine, as a stronghold and as a seat of justice and government. A castle was established on this hilltop site in Roman times. The earliest structure standing today is the Norman keep c.1150.

The Honor, County, Town and Castle of Lancaster were granted by Henry III to his younger son Edmund, 1st Earl of Lancaster, in 1267. Lancaster Castle became a senior place of administration in the Duchy of Lancaster, with courts, a prison and offices.

Through the centuries, the castle has held thousands of prisoners, including criminals of all kinds, political prisoners and individuals persecuted for their faith. In 1612, during the reign of King James I, the castle was at the centre of a notorious trial when ten people from the Pendle area of Lancashire, and nine other people from the area, were accused of witchcraft. The defendants were imprisoned and tried in the castle. Ten people were found guilty and hung on the nearby moor.

In the late eighteenth century, the castle was substantially modified for use as a court and prison. During the same period, the medieval hall of the castle was demolished and a new building was constructed to house the Crown Court and Shire Hall. The last major extension to the Georgian county gaol was a female penitentiary built in 1821.

Today, the Crown Court and Shire Hall are leased from the Duchy to Lancashire County Council. The Castle finally closed as a prison in 2011 and since May 2013, the castle has been opened up to the public as a visitor attraction.

In 1999 The Queen attended a service in the adjacent Priory Church to celebrate the 600th anniversary of the link between the Crown and the Duchy of Lancaster.  As Duke of Lancaster, Her Majesty The Queen also marked the 750th anniversary of the creation of the Ancient Inheritance that is the Duchy of Lancaster with a  further visit to the Castle in May of this year. In the presence of hundreds of well-wishers, cadets, bandsmen and the Duke of Lancaster’s Own Yeomanry as well as invited guests, the Constable of Lancaster Castle formally offered The Queen the keys to her castle in front of the historic John of Gaunt Gate. The keys were, of course, handed back to the Constable for safe keeping.